A Dispatch From an Endangered Bird’s ‘Garden of Eden’ 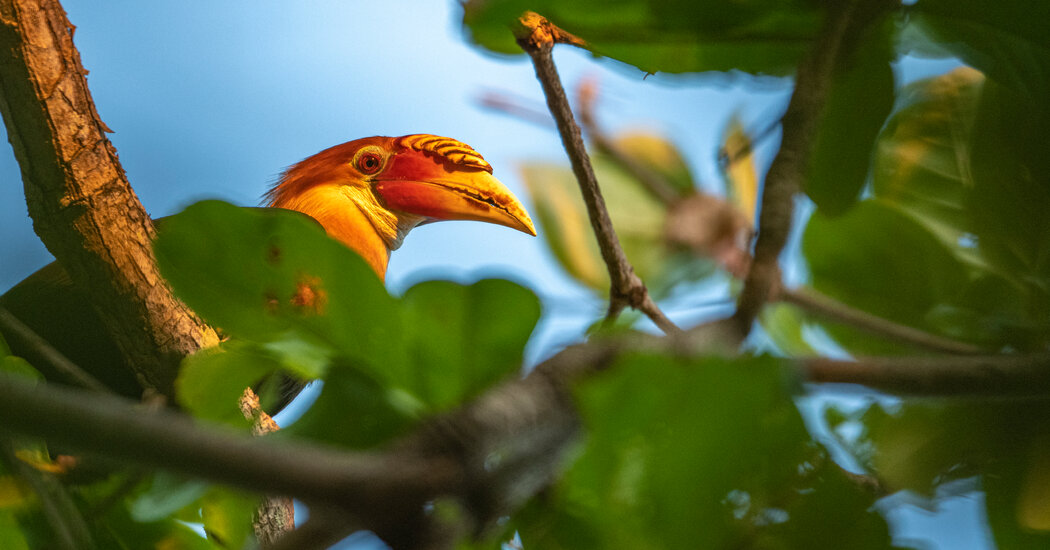 By the end of 2019, I was ready for a change of scenery. Working as a natural history photographer, I’d spent the previous two years tracking snow leopards in the Himalayas. Then, one snowy afternoon, I received a brief call from Dr. Rohit Naniwadekar, a bird biologist with the Nature Conservation Foundation. He asked me to get to a small volcanic island in the northern Andaman Sea as quickly as I possibly could.

Within a week, I had swapped the seemingly endless landlocked mountains for a tiny speck of land at the edge of the world.

Narcondam Island, a designated wildlife sanctuary where Dr. Naniwadekar planned to conduct his research, gives new meaning to the word “remote.” Situated about 80 miles to the east of the main spine of the Andaman Islands and totaling only about 2.6 square miles (twice the size of Central Park), Narcondam is a dense green volcanic mountain peeking out of the deep blue water. To date, exceedingly few scientists and natural history photographers have set foot on its uninhabited beaches.

Getting to Narcondam, which is part of the Indian union territory of Andaman and Nicobar Islands, wasn’t easy. After gaining the proper government permits, we caught a flight from mainland India to the Andaman Islands — straightforward enough. But that was followed by a long night in rough seas to reach Narcondam. Moreover, the island does not have a docking or soft landing option, so we had to jump into tiny rubber boats and fight the waves before disembarking. We were drenched from head to toe.

Finally, the five of us — three scientists, a wildlife biologist turned artist and I — found ourselves cast away with not much more than our equipment, some dry rations and a healthy dose of excitement.

The team’s main goal was to study and document the Narcondam hornbill (Rhyticeros narcondami), which is endangered and endemic to the island. As luck would have it, we saw our first pair flying above the beach as soon as we hit land.

Having seen the Great Hornbill of mainland India myself, I noticed that these hornbills were smaller than I had expected. But they were nonetheless stunning. The male is a little larger in size, with a rufous-colored head and black body, while the female is entirely black. The bird’s closest extant relative is the Blyth’s hornbill, found in Papua New Guinea.

Within a few hours of our arrival, we realized that Narcondam hornbills were in high abundance, even if restricted to the island’s tiny area. Determining how many of them exist and what factors encourage their abundance were two of the critical questions that Dr. Naniwadekar’s team aimed to understand during the two-month visit.

Exploring Narcondam was a challenge. Its steep terrain is composed of ridges and valleys formed out of loose, crumbly rock, which is held together by seemingly impenetrable shrubbery and woody climbing plants known as lianas.

Still, each day we set out in a different direction from our base, allowing the island’s beauty to unfold before us. Some patches were dry and reminiscent of a deciduous jungle, while others were mist-laden and called to mind dense cloud forests.

We made our way across tangled underbrush on our hands and knees, and gazed up at giant buttress trees, some 130 feet tall, filtering sunlight through layers of the canopy down to a carpet of ferns below.

In time, the team began investigating the hornbill’s surprising abundance. They walked line transects at different elevations to estimate the bird’s population densities. Vegetation plots were laid out in an attempt to understand floral diversity. Camera traps were installed near fruiting trees to study the impacts of rodents on native plants.

The work was time-consuming, physically demanding and monotonous, but the thrill of discovering and identifying different species of plants and animals while out in the field was enough to buoy the spirits of the entire party.

During the day, shouts of Latin names of various plants and birds echoed through the forest. Come evening, we’d kick back with fresh coconut water in the comfort of a hammock. At night, we’d stare out into the ocean, contemplating the base of the island that lies beneath the water’s surface, dreaming of all the life we couldn’t see.

Some days, I’d venture out on my own to look for nests, sitting in trees for hours on end with a zoom lens, hoping to capture close-up images of the hornbill. I became fondly familiar with the ruckus they’d create while playfully chasing each other or feeding on a ficus tree.

Narcondam hornbills have massive beaks that they use to pluck thick fruit, which they proceed to toss delicately into the air before swallowing it or giving it to a mate.

It was courtship time, and we were treated to an explosion of behavior that was difficult to unravel. For weeks, we observed constant vocalization, courtship feeding and pair-bonding between potential mates as they called out to each other. The pairs would hang around nests, cleaning them in turn, flying together, feeding together, preening one another ever so gently.

While I was busy photographing these birds, the team started to piece together the puzzle of the hornbills’ population. They estimated nearly 1,000 birds, corresponding to a density of about 390 birds per square mile — far exceeding all the recorded densities for any other hornbill species on the planet.

Furthermore, the density of the island’s fruit trees — especially that of the figs consumed by Narcondam hornbills — was between two and 10 times as high as in comparable forests.

“Figs have a unique feature of staggered fruiting,” explained Dr. Navendu Page, a scientist at the Wildlife Institute of India and the team’s botanist. “So at any given time there are a few trees in fruit on the island, which ensures a constant supply of food for the hornbills year-round.”

Besides figs, other native plants also occur in profusion. And since hornbills are the largest frugivore on the island, Dr. Page theorizes that the birds effectively tweak the distribution of trees to favor the ones they feed on. In other words: By spreading the seeds through their droppings, the hornbills are steadily transforming the island into their own Garden of Eden.

Still, the birds face challenges. In recent years, the Andaman and Nicobar Islands have been a critical asset to India in the country’s effort to counter China’s expansion into the Indian Ocean. As such, the archipelago faces risk from potential infrastructural development.

Climate change is also a potential threat, particularly since it’s known to disrupt the fruiting patterns of plants. “In such a tightly connected ecosystem,” Dr. Naniwadekar explained, “just one or two bad fruiting years might substantially impact the hornbill population.”

Rats, not native to the island, have also invaded Narcondam. Initial camera trap studies suggest that they are feeding extensively on certain seeds and might eventually alter the island’s floral composition.

At the end of our nearly two-month sojourn, as some of us departed on rubber boats toward our extraction ship, I saw a pair of hornbills flying into the open sky, glowing in the golden light of dawn. It struck me that this may well be the last time I set eyes on these birds — true “evolutionary wonders,” as Dr. Naniwadekar had once described them.

“They should be given the same respect and protection that we offer to the man-made wonders of our world,” he added.