10 Fun Facts About the Red-tailed Hawk 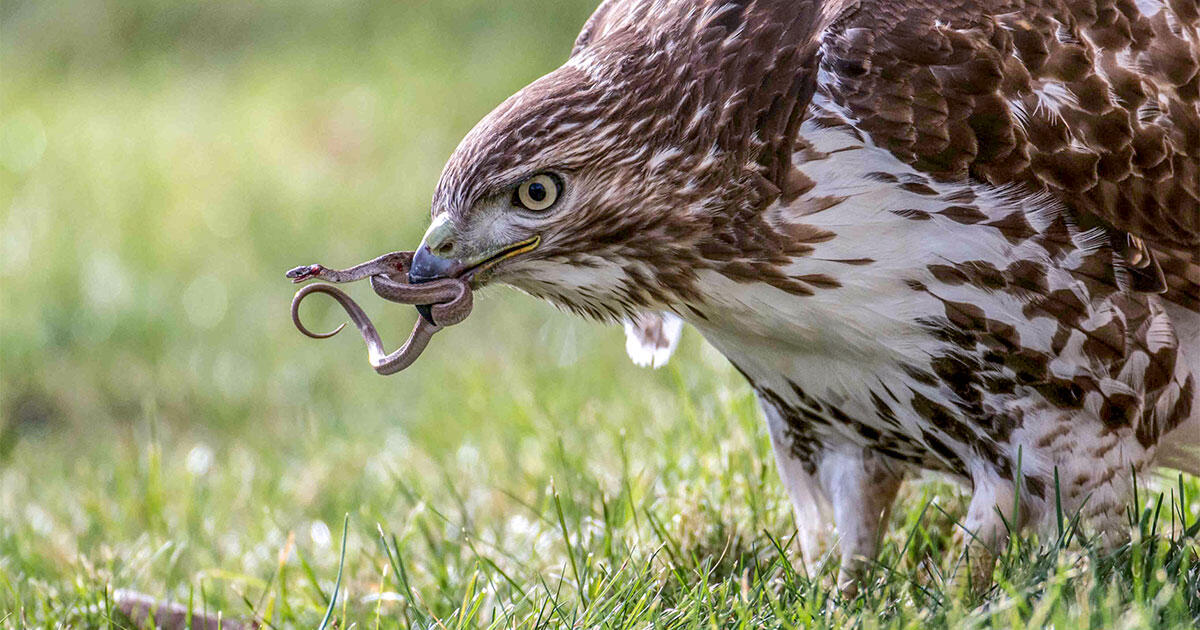 The Red-tailed Hawk is a great gateway species into birding or hawk watching. Among the large, soaring hawks known as buteos, Red-tails are the most widespread in North America. They often hunt along highways, circling overhead or hovering in place as they scan the ground for prey. You’ve probably seen one from a distance, but here is a closer look at this magnificent bird.

1.) Though they were known among North America’s Indigenous peoples, the first Red-tailed Hawks studied by Western scientists were identified in Jamaica in 1781 and named accordingly: Buteo jamaicensis. Their other namesake is their characteristic reddish-brown tail feathers, a trait shared by many of these hawks—but not all. Juveniles don’t get the red feathers until the start of their second year, instead sporting brown barred tails. Plus, with 14 subspecies and many color morphs, adult Red-tailed Hawks have a variety of plumages.

2.) Red-tails are among the largest Buteo hawks in North America, second only to the Ferruginous Hawk. They’re built to soar, with wingspans that average a little over four feet. Females are typically much larger than males, which is common among raptors.

3.) Adult Red-tailed Hawks make a majestic call:a hoarse screech that lasts for two to three seconds. If this sounds familiar, it’s probably because Hollywood loves it. Many movies play a Red-tailed Hawk sound when a Bald Eagle appears on screen. Though the eagle looks intimidating, it makes a paltry squeal compared to the adult hawk’s piercing cry. Juvenile Red-tails, on the other hand, emit a series of short shrieks.

4.) As their threatening call suggests, Red-tailed Hawks are formidable hunters. They scan the ground by soaring in wide circles or by perching on a tree or telephone pole. Then, they snatch their prey—usually a rodent or other small mammal, but sometimes a snake or another bird—with talons up to 1.33 inches long.

5.) Red-tailed Hawks have sharp eyesight that’s eight times better than a human’s. In flight, they can spy a mouse on the ground from 100 feet in the air. To keep their eyes clean, birds have a third eyelid called a nictitating membrane. Red-tailed Hawks can close this extra eyelid when perched to shield their eyes from wind, or for protection when diving to make a kill.

6.) To woo a mate, a male Red-tailed Hawk might catch prey and pass it to a female in midair or perform repeated dives. In courtship rituals, the male and female fly in circles together. Sometimes, they lock talons and take a dramatic spiraling dive toward the ground.

7.) Red-tailed Hawk couples are experts at co-parenting. They build their nest together with sticks and leafy branches, often in a tree, but sometimes on a cliff ledge or building. The pair shares duties incubating their eggs for 28 to 35 days—though the female is usually the one sitting on the nest, while the male hunts. Once chicks are born, this division of labor continues: The male hawk catches prey and delivers it to the female, who feeds it to the young in small pieces.

8.) Red-tails are partial migrants. Most that breed in Canada, Alaska, and the northernmost Great Plains will fly south for the winter to other parts of North America. Others throughout the Lower 48 stay put all year. This means that in many parts of the country, Red-tailed Hawks become even more abundant in winter.

9.) Males are territorial and will screech in flight to stake out their space during nesting season. Often they defend a territory of about two square miles from other hawks. But in urban areas, Red-tails are living closer and closer together. In New York City, for example, these birds have been observed nesting mere blocks from each other.

10.) Decades ago, one Red-tailed Hawk in New York City achieved celebrity status. Named Pale Male by residents, this bird stood out not only because hawks were far less common in the city then, but also because he was a light color morph with an almost-white head. New Yorkers generally agree he arrived in Manhattan in 1991, but there’s impassioned disagreement about what’s happened since. Some hawk-watchers maintain that Pale Male is still alive, while many others say there’s no way he has survived so long in the big city. The skeptics argue that so-called sightings are of look-alikes, not the star bird himself.